THE STORY OF GUS

Beloved little guy to his pappas Stewart and Derek, Gus died unexpectedly in his sleep Friday May 3rd, 2013.  He was one week shy of his 8th birthday.

He leaves behind his sister Maddie who was his litter mate, as well as Derek and I, who will remember him always as our cute little guy.

Without real children to call our own, our lives were forever transformed for the better when Gus and Maddie came home with us on Father's Day 2005.  We were on a long drive home from a dear friends wedding, when we came across 5 little puppies in a brown cardboard box.  The puppies were for sale by owner for $20 each in Bancroft Ontario.  The owner also had the mum (an American Eskimo) and the father (an Australian Shepherd).  The puppies were a beautiful accident and in need of homes.

Three puppies were a dark brown and white, while two were mostly white with tan markings.  The two that were alike seemed so paired together that we knew they could not be separated--two was never our intention but will forever be our blessing.

We brought them home in the same cardboard box that they were resting in...and to this day, we use that box to keep their toys stored in.  That box has moved with us from house to house, province to province.

As the pups grew, they started climbing stairs and playing together, eventually being big enough that they could play in the backyard without being blown off their feet by a slight wind.  They were growing up.

Gus is on the right.  Maddie to the left.

When the pups were 1.5 we moved to Sackville St. in Cabbegetown, where a wonderful neighbour accurately observed how different Gus and Maddie were, despite their near identical appearance.  She commented that Gus was 'an old soul' while Maddie was clearly anything but.  Gus seemed to have many more years of emotional wisdom in his young body than we had ever seen in a dog before.  Whereas Maddie can easily spend time with other people in our absence, Gus always looked for us....waiting and worrying for our eventual arrival home.  Indeed Gus was a vocal worrier and few could escape his endearing attentiveness.  If you were sad, Gus knew it.  If you were happy, he wanted his share.  He would follow you from room to room....never settled in one spot until you were.  And he walked around so quietly behind you that if he wasn't careful, he could easily be left behind in the laundry room or even the garage---where he would sit patiently staring at the door until you realized his absence.

Gus and Maddie changed Derek and I from 30 something Torontonians --living wild and crazy Toronto lives to being full time parents.  Our routines immediately changed forever and became dictated by feedings and walkings and playtime.  We were an instant family of four.  And we did everything together.  Where the dogs were not invited, we did not go.  For most dogs, travel means going to a kennel--but not Gus and Maddie.  We had travel crates and blankets and would routinely fly west for visits to Victoria or Vancouver, as well as many visits to Winnipeg before our eventual move here.  Did they like airplanes?  Probably not, but they sure preferred a few hours in a plane to a few weeks being kenneled.  We got to share with them in holidays with family and friends.  They were our kids; we knew no different.

Gus and Maddie had an incredible sense of routine together.  They knew 'breaky time' vs. 'chow time' and had their walks timed perfectly.  And at 10pm if you weren't heading for bedtime, they were heading off without you. Our dogs were never accustomed to backyard living, plus 40C or minus 40C we had our walking routines; modified as appropriate to our recent WPG move, to include booties and burberry coats as required.  In the days and weeks ahead, we'll need to learn to parent Maddie on her own, who until Friday had never slept more than 10 feet away from Gus for her entire life.

Raising and training litter mates brought special challenges to our home.  We made every effort to observe and manage those behaviours and for a time, Gus and Maddie even had separate walks, trying to ensure they grew up well adjusted with other people and dogs.  But Gus never really brought himself to allowing other dogs too near, especially larger dogs.  But he did make dog friends over time, in particular Emma, Hazel, Nalah, Sparkie and Diesel were dogs he loved to see.  While Gus didn't immediately take to other dogs, if he allowed them into his world, they were lifelong friends, no matter the distance nor their time apart.  He would recognzie these particular dogs from a full city block and pine to get closer to them.  Being an old soul, he knew the value of these very real friendships and carried them with him wherever he went.

Maddie on the other hand, never much bothers with other dogs either way---but for Gus, it was all or nothing. 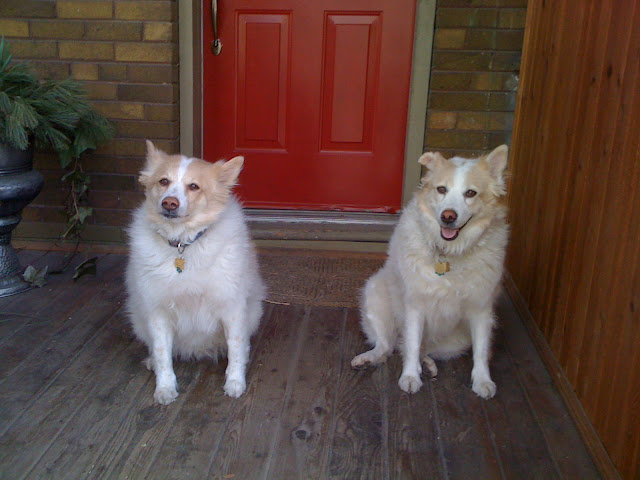 Gus is on the left.

In Dec 2011, Gus started gaining weight and clearly was not himself.  He was diagnosed with Cushings Disease and Diabetes.  He had wonderful long term care and the illnesses were manageable with meds and insulin.  He was first under the care of Dr. Jeff Grams of Blue Cross Medical in Toronto and more recently by Dr. Jonas Watson of Tuxedo Veterinary Hospital.  Both of these doctors and their teams ensured we had the best medical attention possible, as well as practical advice.

I'll never forget Dr. Grams telling me point blank, for Gus to survive, it would take a tremendous investment of time, patience and money.  He wanted us to know what we were up against and what it would take for Gus to survive longer term.  And what is an investment of time, patience and money if not love?  Gus was loved by us unconditionally.  He was our little guy, who asked nothing from us in return.  I immediately took a leave from my work and spent the next four months getting him sorted on meds and insulin.  We did blood charting/curves and started to manage his diabetes with insulin shots twice daily as well as meds for the Cushings.  Provided Gus was not suffering, we were not going to let him go without a fight.  He eventually started to respond to his meds and started to look and act like his normal self again.  Our lives continued forward, happy and fulfilling, albeit augmented by the new routines of pills and insulin.  This was our reality, and we again modified our routines to fit our reality.  It was what had to be done and by all accounts we had beat the odds of his early demise.

In summer of 2012, I returned to work and Derek took a posting in Winnipeg.  We were moving our family to a destination we had talked about many times over the years.  Gus' medical file was transferred to our local Tuxedo Vet Hospital where we started working with Dr. Watson.  I'll never forget our first meeting where the Dr entered the room with a medical file 2 inches thick.  I immediately did what all good Scottish folk do and apologized for being so much trouble.  Dr. Watson welcomed the challenge, sat on the floor with Gus and Maddie and immediately became Gus' saviour.  We continued Gus' medical regime and also tried addressing Gus'  dislike for larger dogs.  Despite our unconditional love for both Gus and Maddie, we were always saddened that we couldn't mix them more easily with other dogs...and here we were moving to a dog friendly neighbourhood where Gus was going to miss out on so much.  Maybe there was more we could do to get him to like other dogs more?

Enter Jen Gower from Tuxedo Vet who also does behavioural work with dogs.   The first time she met Gus she was so surprised that he had bahaviour issues with other dogs.  She saw in him a gentle dog, very responsive to Derek and I and perhaps not as she had imagined.  We did some work with Gus but in the end she proclaimed that we were mostly on the right path with him, but some dogs just don't like other dogs.  So we had given it a try but there wasn't much more to do...Gus was an old soul and did not like the attentions of other dogs.  Plain and simple.

Last week, both Derek and I opted to extend business trips in Southern Ontario so that we could meet for a few days at our cottage.  It was so strange to be there without the dogs.  It was so strange for us to both be away at the same time.  Our enjoyment did not last long.  Within 24 hours of us leaving, Gus stopped eating and had to be taken to the vets.  Given his various health needs, this was not extreme as his meds needed to be managed with food.  At the vets, enter Jen Gower again who cared for him, took him for a walk and ensured he was well looked after.  He was discharged at the end of Thursday as all seemed okay and he went home to his grandparents--a home he knew well and where we had lived for three months when we first arrived in Winnipeg.

At 6:30 am Friday Gus simply did not wake up.  Jen Gower again came to his aid and brought him back to the vets to see what, if anything, could be done.  But there was nothing to be done.

We had our last visit with Gus on Monday morning.  Tuxedo vets had him wrapped in blankets so that we could say good-bye one last time.

A little about Me